While the worst portion of the 2012 drought is hopefully behind us (that was July, when it was over 100 degrees almost every darn day), we'll still in the midst of it.  We did receive some rain with the cooler temperatures that arrived in early August, but it only amounted to an inch or two total (for all of August so far).  Still, that's more rain than we received in June & July combined, so I'll take it!

Unfortunately, the crops were so devastated earlier on in the season that most were just not able to hang on.  I'll share some pictures & details of where our farm season is at this moment, but first I'll tell you what we lost early on & I have no pictures of (really, it was so hot, sad, overwhelming, & depressing at the time that the last thing I wanted to do was take pictures of it all).

Earlier on, we lost:  our red, white, and red cooking onions... all of them.  Our potato crop... all of it.  Our melon crop... all of it.  Our 2nd, 3rd, and 4th plantings of green beans (luckily, that "early" late April chance planting paid off so our CSA did get some green beans).  Our broccoli & cauliflower plantings gone.  90% of our cabbage crop was lost.  All of our heat-tolerant summer lettuce crop bit the dust.  75% of our beets.  99% of our winter squash crop.  Many other crops never even sprouted when I planted seed.... they never even emerged from the ground.

Those crops that did survive showed much lower yields, insect damage, and disease.  And all this was with irrigation.  Water from a hose, sprinkler, drip tape, etc. is just not the same as rain, as I've heard many other farmers agree with me on that this summer.  It can only do so much... it's like a band-aid.

Enough of the negative talk, though.  Our Community Supported Agriculture program (CSA) survived so far!  By closing our farm store & dropping farmers markets way back in late June / early July, we were able to salvage enough vegetables, fruits, and herbs to fill our CSA customer's shares each week, and still going.  Once again, we've had no rain for about 2 weeks now, and temps are back in the 90s.  Since I've finally been able to get fall crops & seeds in, I'm desperately hoping for rain this weekend.... there's a 50% chance.

Here is the state of some of our farm crops today.  You'll notice many weeds.... that's because once these crops were lost I saw no point in weeding them anymore.  Plus in July when the heat index was 110 degrees, the absolute last thing anyone wanted to do was weeding... or anything else outside besides watering the farm animals 6 times a day just to keep them alive.

Here is our winter squash patch.  Dead.  Irrigated at least once per week during the worst of the drought, and it was simply too weak... and pests attacked.  Vine borer bugs, squash bugs, and stink bugs took it all down.  This is what a winter squash patch looks like in October... and this picture was taken in mid-August.  You should be seeing hundreds of squash laying on the ground. I see about a dozen.


Next up is our cabbage.  We lost about 90% of it.  The surviving crop that was somewhat decent (though very small heads) was given to our CSA members in 2 weeks of shares.  We stopped weeding the cabbage patch back in late June, when it became apparent that it wasn't going to survive well. 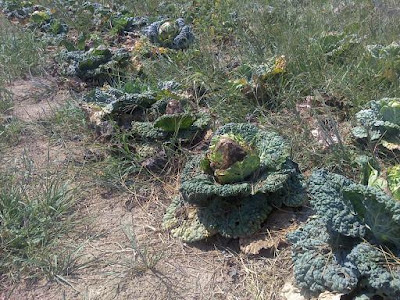 A fancy variety of lavender eggplant.  Just absolutely fried in the heat & drought. 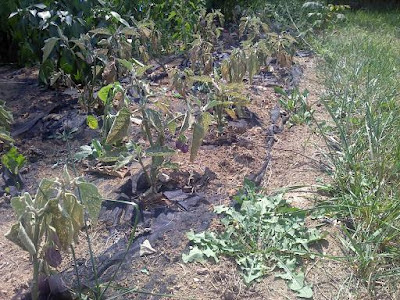 Our zucchini, patty pan, and summer squash finally bit the dust a week ago, along with our cucumbers.  I watched as disease took it's toll on the weak plants, killing them off one by one down the row.  We had about 100 plants of summer squash total, now all pretty much gone. 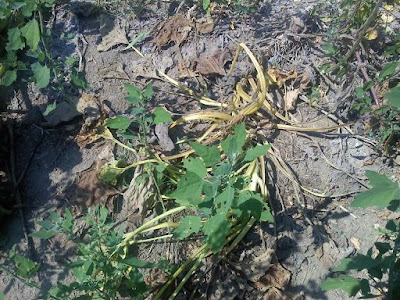 There are cracks all over the farm.  The ground began cracking wide open back in June, and got really bad in July.  Cracks in the ground... some of the cracks are many feet long, and my sons and I have often wondered just how deep the cracks might go.  Here is a picture of a small crack in the herb garden.  And, funny enough, the green strip that you see at the bottom of the picture is sprinkler tape irrigation. 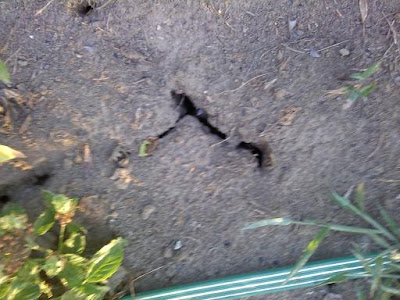 The Bright Spots!
The tomatoes, peppers, kale, swiss chard, garlic, sweet onions, some herbs, and a few other crops have held on fairly well!  Granted, they're not doing great, but they're producing enough for our farm's 35-member CSA program as well as our family.

Now, let's hope for some rain soon, so that in 2 months time I can show you pictures of beautiful fall crops, gorgeous lettuces, greens, spinach, and many radishes.  My fingers are crossed... are yours?